I know dragon boat for long as there is a dragon boat day Day in China. But I didn’t see the dragon boat until I was 24 years old when I was in Hong Kong. I went to Lantau Island on that day and saw a dragon boat race.

KPMG was recruiting dragon boat team members in October last year. I was told dragon boat was a popular sport for team building and KPMG had the dragon boat team for  5 years. The dragon boat race would be in the second week of the Chinese New Year, which is also the closure of the celebration. I didn’t hesitate and paid for my registration. My body was calling for my Chinese blood and I knew it.

The training started in October as well. It was fun for one second then became hard. I needed a full bottle of water for the training and I particularly did not like wearing wet clothes going home but the water was inevitable from the strong peddlers.

On Sunday 25th February, we were at Darling Harbour at 7.30am. The nerves and emotions were etched into everyone’s faces, yes it was the race day. There were 48 corporate teams in the race and every boat has 2 heats. KPMG’s one boat was in the major final and the other was in the minor final. In the minor final, one KPMG boat was narrowly beaten by another team. It wasn’t great news for us waiting for the major final.

I was lucky to be in the major final and it was pretty intense. Westpac clearly didn’t want to be challenged as they were leading the game for almost 10 years. At the starting point, there were war cries from them but our team remained quiet and focused. After a few deep breaths, we started the race. The first 20 strokes were really fast and I could feel everyone wanted to win the game. At 100m, “Go Now, Everything” was from the back of the boat – the traditional call that we had to empty the very last ounce of energy. There was supposed to be a transition with longer and slower stroke but no one slowed down. I followed the person at the front closely. The last 20 seconds was like a long day, but we finally finished. I couldn’t see the result and didn’t know what happened until some KPMG crew were cheering from the bank. I thought we won but the boat was very silent. I once thought what would happen if we won, the funniest scenario was all of us jumped into Darling Harbour, but no, nothing crazy happened. One stoke, two strokes, we moved slowly back to the pier. We took a picture when we jusmped out of the boat with the gesture of Number 1. That was our celebration. 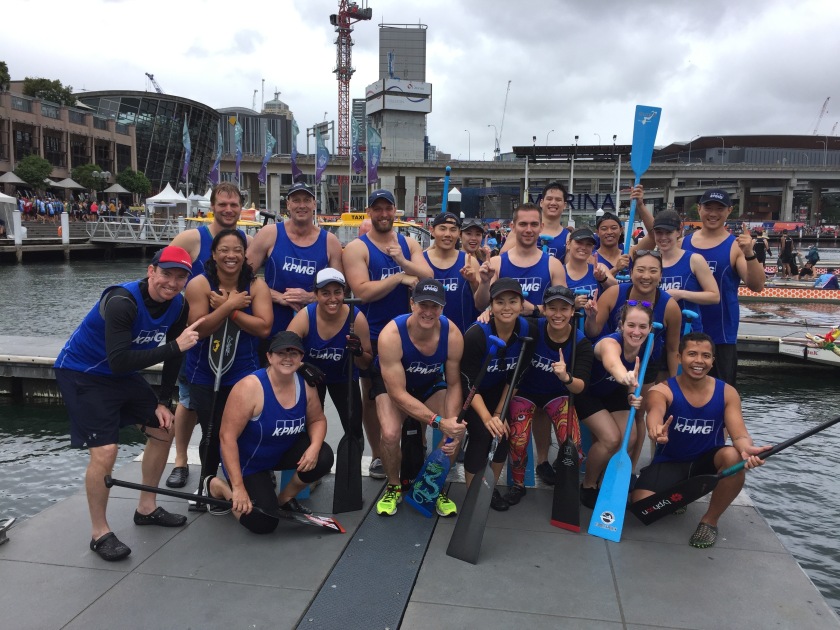 Not sure it was just for us or it was a tradition at Dragonboat race. Everyone from the race used their paddles to build a corridor for us to go through and I just gave high five to everyone. I finally realised that we indeed won the race. It was amazing. On the way back to the crew, I saw the announce board. We finished the race at 50.06s, only 0.22 seconds ahead of Westpac. It was very close but so glad we won.

It was raining on that day and I walked home wet but I had no complaints at all. In the night I heard someone said “Are you ready?” and I put my paddle in the water. Yes, it was a sweet dream.

Yes, I registered Sydney marathon in the last minute at the early bird rate. I am sure I will not be ready for it on the day, but I will try my best.

3 years ago, a colleague went for the Sydney marathon and told me the experience was great, but I had already registered Melbourne marathon so I didn’t go to Sydney in that year. I totally said goodbye to the city of Melbourne after 4 marathons. Although I have changed my focus to triathlon this year, I just can’t resist doing another marathon.

The Sydney route looks complicated and there are no straight roads as in Melbourne route, but the view would be great, especially in the beginning when people cross the Sydney Harbour Bridge and in the end when people run to the Opera House.

I have 5 more weeks to prepare for it. My daily training should be enough for me to finish the run, but I just need to have a 3+ hours run at the weekend to make it easier. The third hour is going to be really painful and I might not have enough time to taper.

5 weeks is also a nice waiting time. I hope the sea water would be warm enough to swim after the marathon so that I can recover my swimming training by then.

I don’t like work functions. I work in a small firm, so over working time, I have had enough social talks with colleagues. When it comes to work functions, I have nothing to talk to them any more.

I missed out dinners for the last two end of financial years, so when the HR manager walked to me and asked me if I could make it this year, I slowly said yes although I really really didn’t want to go – it was a Thursday and I had to go to the gym that day.

Anyway I went there. It was in a Thai restaurant; the only thing I could eat was spring rolls – they ordered too much meat.  I met this guy who was the partner of my colleague and he was the fitness instructor in the gym. We had a good conversation about how to make friends in a new town, how does bee work, and the upcoming election ect. Then it came to his specialty – fitness, I told him I had done marathon four times. He was not surprised but asked me why not do a triathlon.

This is an interesting question. I have been thinking about triathlon for ages but I have never made any efforts to get it started. I am relatively okay with running and cycling but very bad at swimming. In an ideal situation, it can take me three hours to finish 800 m of swimming, so my imagination of triathlon aways stops here.

On that evening, I thought I might be quite motivated. That guy’s encouragement reminded my early days in preparing my first marathon. It was hard and boring but not mission impossible. I might be a bit older now, but I could still try something new. So I told him I would start training for my first triathlon.

Following his suggestion, the next day I went to the pool and enrolled in an 16 weeks’ swimming lesson starting from this Saturday. It is never too late to do something crazy I guess.

This is the next question, I have a pair of budgie smugglers but I might need new swim trunks to cover myself a bit more. Not sure!

There are two strange sports in Australia. First, boys love footy – it’s more like rugby, but they call it footy. Nobody in other countries like this sport, but Australians are crazy about. At certain time in the year the first question people ask you is about footy. Once I asked a friend about the pleasure to watch footy, he said it had more goals that real football so he could yell more. What a nonsense reason. Well I was forced to pick a team by my coworkers, and I haven’t decided. There are many Geelong supporters in the office but I think I may choose Hawthorn..

Another strange sport is called netball. I never heard of it before I came here but all Aussie girls know it and can play it well. When I lived on campus in university, there were many competitions between different halls and girls absolutely love it. I never went to watch any games but my impression was it was a girl’s game.

There is no other place more Australian than the country. If you don’t play netball or footy, you really can’t survive in Swan Hill. Nearly all the people in the office or their partners play for one local footy club, and netball season in town never stops. Interestingly here all netball teams are mixed, so boys got a chance to find their feminine side. I misses the first season early this year and my colleague invited me for this new season. Today was the first match.

My position was Wing Defence tonight, and my goal was to annoy the Wing Attack – that was just my understanding. The WA girl was fast but quite small compared to me so it was not so difficult to defend her. I was penalised quite a lot for the defence distance – 3 feet – that was too short for me but I think it keeps a reasonable distance and makes net ball quite safe to play. Lots of running after one hour play, but I think I may like it.

I look forward to next Monday.

I registered and got my confirmation mail with my race number, so Melbourne Marathon is going to be my first marathon in this October.

Still till the time I paid, I was wondering if I need to register a half marathon, but no, I chose the full one. Since I am quite confident to do a half even now, if there is still 4 months left, why not give me a target more challenging?
Melbourne Marathon is more like a festival, everyone can join, they don’t even have any requirements. On the enrolling form, I was asked the estimate time, I filled 7 hours, then they gave me a warning: you should familiarise the route by yourself. Okay I will.
So the next step is to keep training, I seriously downloaded a marathon app on my iPhone. And from next semester on, I will have to go outdoors, it seems everything will be as planned.
I called my previous colleague in China after I registered, she was the first one I knew to do regular marathon, and also the one who persuaded me to start trying. She was quite numb, maybe because she can’t join and lose the chance to humiliate me personally by finishing it 3 hours earlier. Her base is HK Marathon, that’s the one I’m interested too, hopefully one day I can race with her.
Need a reason for marathon? Very simple: if I can do something I never ever thought of before, then I’ll have the courage for everything else.
Widgets